Relapse Prevention
​
• RDS, or Reward Deficiency Syndrome is caused, in part by a genetic imbalance of dopamine in your brain

• Dopamine is the neurotransmitter responsible for your feelings of happiness, overall well-being and facilitates your decision making ability

• When there is an imbalance due to either genetics or a stressful environment, your body tries to normalize the brain reward cascade

• Individuals experiencing RDS can also have unhealthy craving behaviors, and are more prone to excess sugar and fat cravings and intake; generally overeat; and are more apt to experience metabolic dysfunction 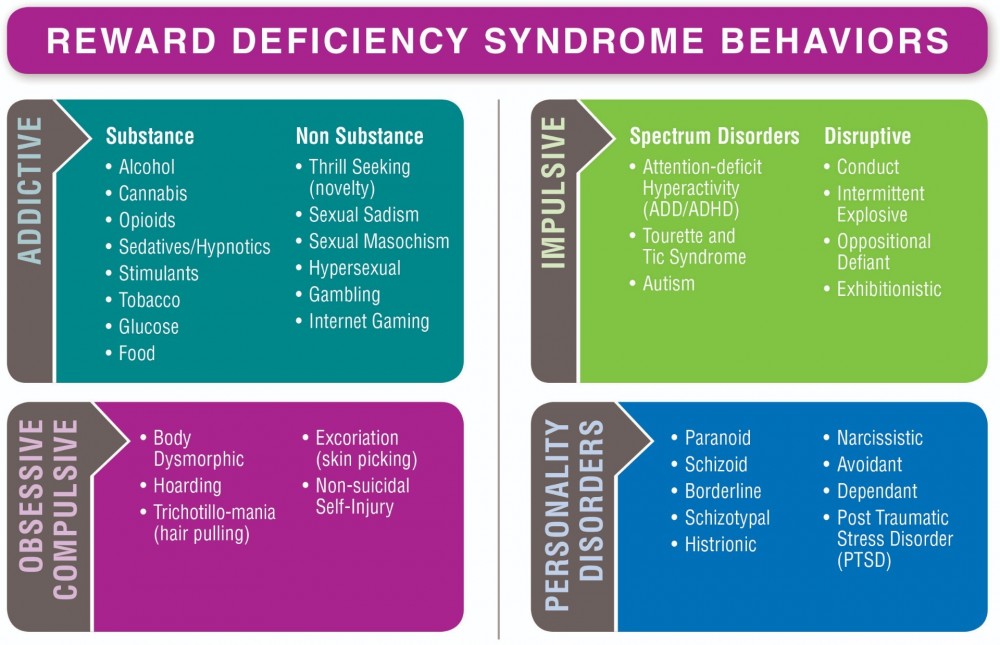 Dr. Kenneth Blum is a renowned neuroscientist specializing in psychiatric genetics, and is one of the world’s leading authorities on the subject of dopamine. His discovery of the ‘reward gene’ (DRD2 A1), sometimes referred to as the ‘addiction gene’, made global headlines.  According to Dr. Blum, the A1 variance of the human DRD2 (addiction) gene has been associated with drug addiction, alcoholism, and other impulsive addictive behaviors.  Subsequent discoveries led Dr. Blum to coin the phrases, “Brain Reward Cascade” and “Reward Deficiency Syndrome RDS”.

RDS is a disorder of the neuro-chemistry of the brain, affecting over 110 million Americans. RDS is defined in SAGE Encyclopedia of Abnormal Psychology 2017.

Reward Deficiency Syndrome (RDS) involves dopamine resistance; a form of sensory deprivation of the brain’s reward or pleasure mechanisms (Blum et al.2009). The syndrome occurs as a consequence of the inability to derive reward from everyday activities. Addiction is one manifestation of RDS, although RDS can be anywhere along a spectrum from mild to severe.

The Basis of the RDS

Dopamine is a foremost component of brain function and RDS (Saddoris et al. 2016), and is also the key to feelings of well-being. For example, feelings of happiness depend on excellent brain dopaminergic functioning. This is brought about by normal function of neuroanatomy chemistry that leads to the release of dopamine. Dopamine causes “pleasure” and reduces “stress”. The release of dopamine at the reward site of the brain Nucleus Accumbens (NAc) involves a complicated process of neurotransmission called the “Brain Reward Cascade” (BRC).

Dopamine released into the synapse results in feelings of well-being and reduced stress. But the ultimate release of dopamine involves a complicated multi-step process which not only controls dopamine release, but the quantity of dopamine released. This process of neurotransmitters, such as serotonin, endorphins, and GABA causing dopamine release has been termed the Brain Reward Cascade (BRC) by Blum and Kozlowski in 1989.
Why are all Addictions Classified as “Reward Deficiency Syndrome (RDS)?
Following extensive research, a new understanding arose relating dopamine release and addictive behaviors. Research has shown alcoholism acts similar to opioids, cocaine, nicotine, food and repetitive behaviors like gambling and sex addiction in dopamine homeostasis. These psychoactive drugs and certain behaviors produce a surge of dopamine in the midbrain (mesolimbic reward center) which acts as the biologic substrate for addictive behavior. Individuals who are genetically predisposed to addictions “crave” this dopamine release. These individuals crave dopamine because they have a reward deficiency that constantly drives them to actions to fill this deficiency. The impact of RDS can be reduced through non-pharmacologic treatments that help minimize hypodopaminergic activity such as exercise, diet, music and safe non-stimulant nutraceutical dopaminergic agonist therapy.

Watch this 8-minute video below about the science of restoreGen™ (KB220Z) and how it works in the brain.
IMPORTANT NOTICE for Video below: Although this Video refers to LaVita Synaptamine™, the liquid form of KB220Z; at this time, Dr. Kenneth Blum who patented KB220Z is only endorsing restoreGen™ products. The science presented in this video is an accurate description of how restoreGen™ products (KB220Z) work.
Information on this website is not intended to replace a one on one relationship with a qualified health care professional and is not intended as medical advice. These statements have not been evaluated by the FDA and this information and the products are not intended to diagnose, treat or cure any disease. You are encouraged to make your own health care decisions based upon your own research of the subject and in partnership with a qualified health care professional.
​TOTAL HEALTH SOLUTIONS, INC. TM
​T. Boland, ARNP, LMFT, Ph.D. ABD. FAARM
– Phone: 954-577-0008 –
HIPAA Secure Email: totalhealthsolutions@protonmail.com